We’ve been doing quite a bit of painting around here lately. Unlike the tones of drawing we’d been doing previously, painting – especially BIGGER pieces – is pretty tricky to do on a flat surface… For the last couple paintings I did (Retired Rat Roams Rural Roads, Tentacle Creature loves Pretty Unicorn, and the Soldiers of Neukirch Uniform Plate) I dug out his old tabletop easel that my grandmother had used for I don’t know how long. 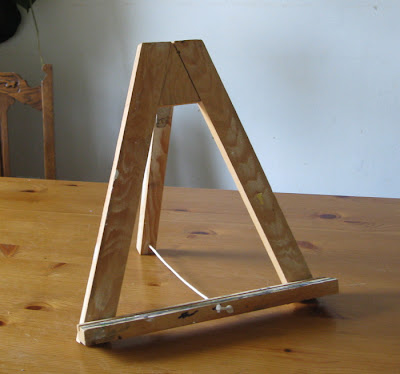 Handy sturdy little thing, probably built for her by my grandfather or step grandfather. Somehow it had come into my possession and sat unused for years.

Of course with all this painting going on, the kids got rather excited about he idea of painting themselves… and I got excited about them painting – though had avoided it for some time being rather concerned about the potential for MESS!

As I said painting on a flat surface just wouldn’t do (sleeves in the wet paint and getting smeared all over EVERYTING!?) so I realized we’d need more easels.

After snooping around downstairs I found a bunch of tiny little ones: 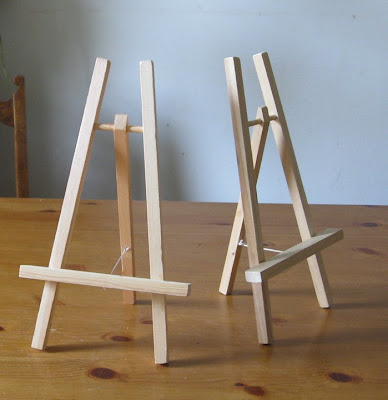 The seems a little spindly and I had no idea where they came from., but we tried them out anyway. I thought maybe Amanda had used them for the summer camp she had run years ago. After using them we realized there were not really made for children to actually use as easels ( I later discovered they had come from my mom and were really for display purposes ONLY!).

Being a handy sort of guy, however, I decided to copy the simple sturdy little easel my grandmother had. 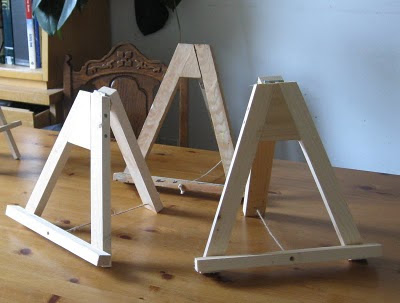 In a couple of hours I had manufactured two simple, solid, sturdy easels for the kids! 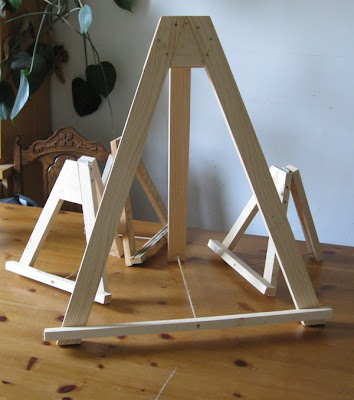 Then I made another, bigger version for myself (in anticipation of working on LARGER pieces in the not to distant future!).

I think I might make a couple more smaller ones – in case we have any smaller friends come over to paint with us!!
Posted by tim at 1:01 PM