I decided I’d start on a second series of Critters on Bikes. The first bunch were fun, and a lot of people seemed to like them. To start with I thought I’d simply redo some of my favourites from the first series (no thinking involved, just start painting!). I have a couple new ones in mind too, but to start with it seemed right to start where the first series began… 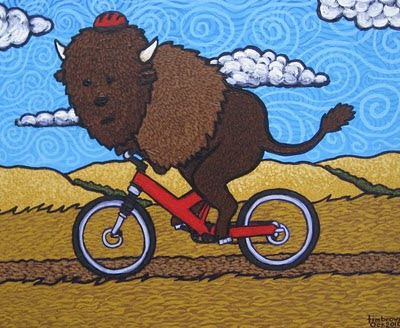 I’ve started the Touring Camel and then I might work on the Cyclocross Moose… then move on to some new critters. These, however, are much bigger that the original series. The original series were small paintings on paper to fit in to these wee picture frames Amanda had bought (so the bigger ones were 18x12cm (~7”x5”). The new ones are on Medium Density Fibre board with their own frame for hanging built into the back and are roughly 50x40cm (~20”x16”). I’m also using slightly better paints.

You can see the original Bison painting HERE.
Posted by tim at 10:01 AM