Wow... I went to make a new post and realized there was this draft sitting here that I started... well... a LONG TIME AGO... like, Maybe January or February of this year...? I guess I better finish THIS up and post it before starting another!
Back in JUNE of last year, Keira and I started working on the projects in Paint Lab by Deborah Forman... and then promptly got busy with other things... She has been HOUNDING me ever since to get back at it... and so we have!

A couple weeks ago, we tried Project #2 - "Let It Pour" - Inspired by Helen Frankenthaler.

The idea was to pour liquid acrylic - mixed with a liquid medium and water. I wasn't sure about the state of my acrylic paints. And I certainly didn't have a liquid medium. And didn't have any prepared boards or canvases. So I got this idea that we could try this with watercolour or gouache suspended water and pour it on Watercolour paper... 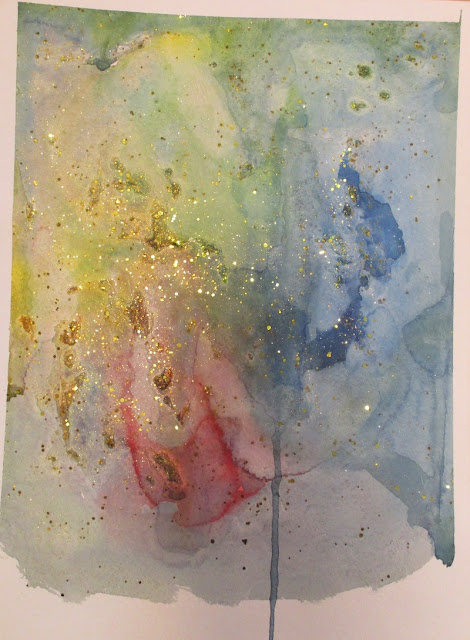 One of Keira's - I think this was the best of the bunch. She saw me adding glitter glue to one of mine and decided this needed some as well. I think it worked out rather well. 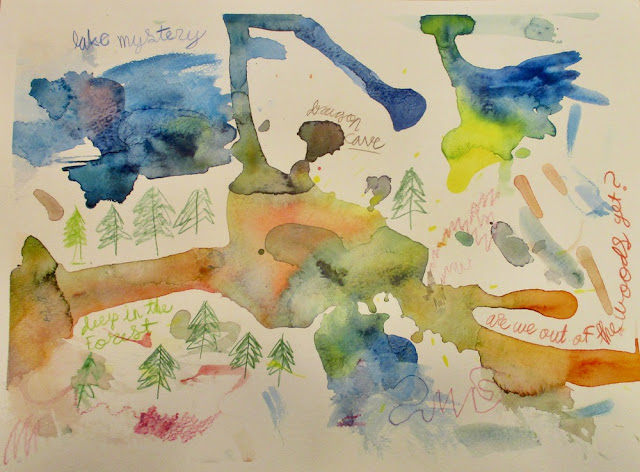 Another one of Keira's 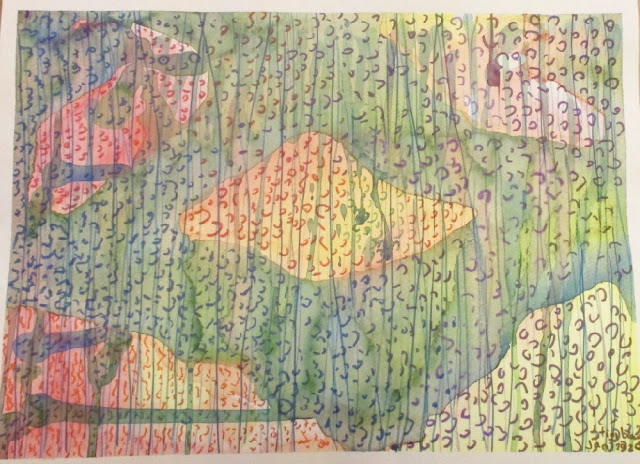 Instructions for Building my Funeral Pyre in the Rain,
January 2020,
37cmx27cm,
Watercolour (paint, pencil and marker) and Gouache on Watercolour Paper
Tim Brown

The poured mess was boring.... so I added to it with Watercolour pencils and markers. 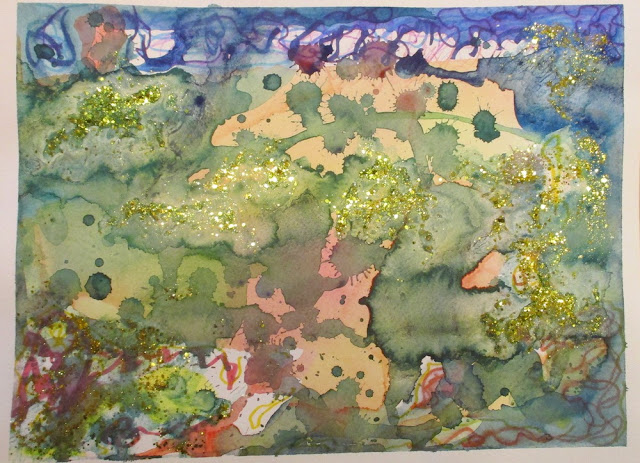 The following week, we tried again with Acrylics and some cheap canvases I picked up from Dollarama. We tried mixing acrylics I had with water, which... didn't work great. I think tried mixing it with some old Stevenson acrylic "matte varnish" that was nothing close to "matte" and, thus, I had never used. It worked... a bit better... 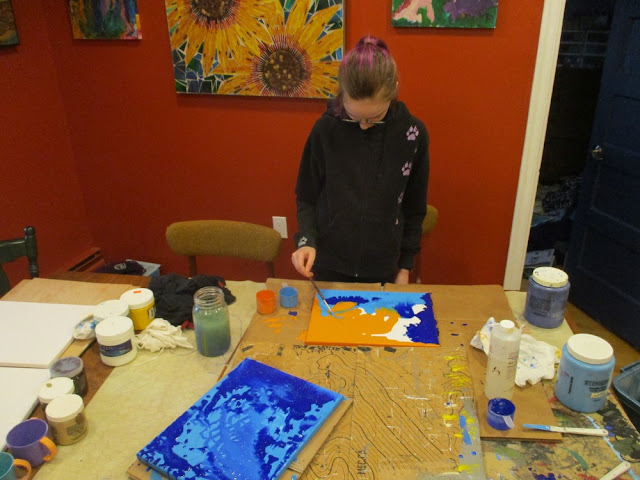 We were doing this in the dining room, though, as the craft/art room in the basement is filled with stuff from the Game Room which is undergoing renovation. Despite cardboard and plastic covering the table and rags everywhere - it was totally paranoid about getting very runny liquid acrylic all over everything and incurring the WRATH OF AMANDA... which may have kept us from getting REALLY crazy with this. Also, I discovered, number of my acrylic paints had dried completely solid, and others smelled as if they were rancid!? So we were somewhat limited in our palettes. Thirdly, we were using relatively small canvases - I feel like this might have worked better if we'd had bigger ones - but the day I went to pick them up I had a number of stops to make and so only picked up ones that would easily fit in my courier bag...

Despite these setbacks, I think it turned out better than the pouring watercolour experiment! 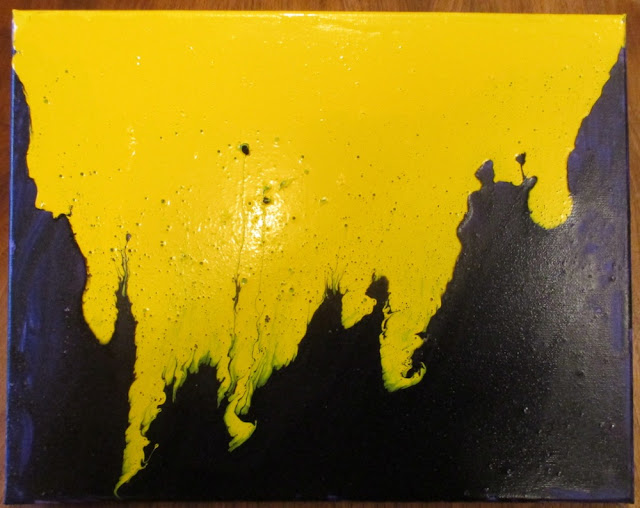 Again, I think it was Keira's that turned out best - not that it's a competition - just looking at what the lab suggested, I feel like her's really captured the idea best out of the four. 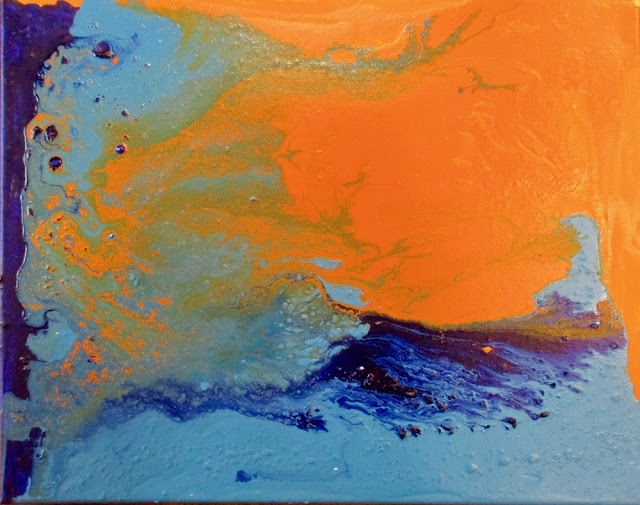 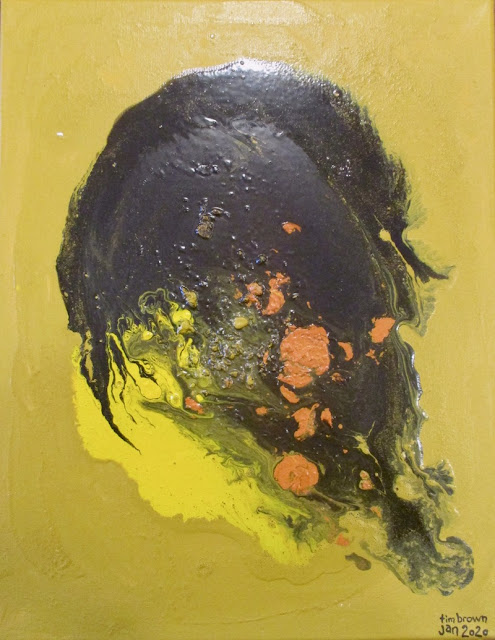 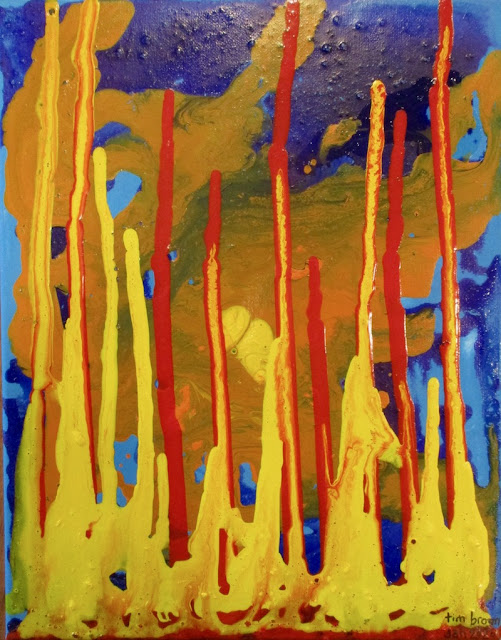 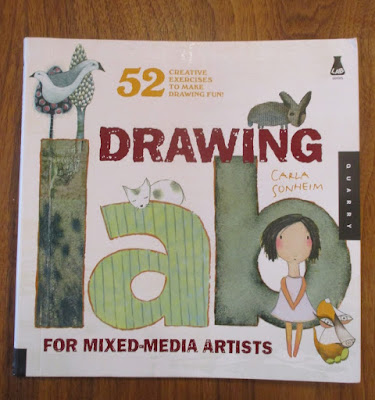 Back to doing more projects from Carla Sonheim's Drawing Lab...
And now we got to the part that I hadnt' finished and I have to kind of guess what was going on... Looks like we were doing drawings of Cats and then maybe some blind contour drawings of giraffes and other  animals...
Looks like mine are first here... 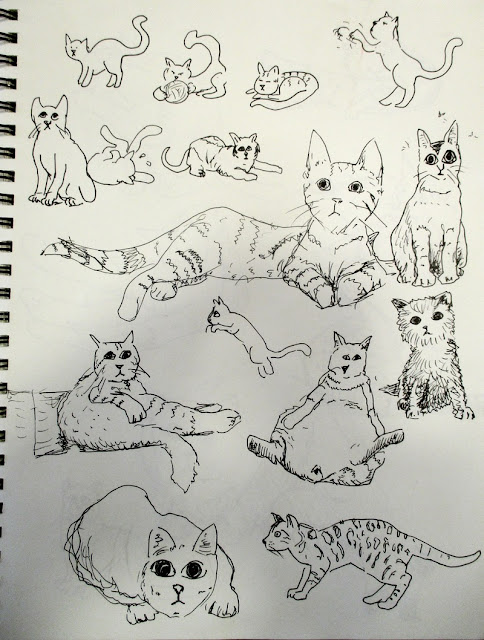 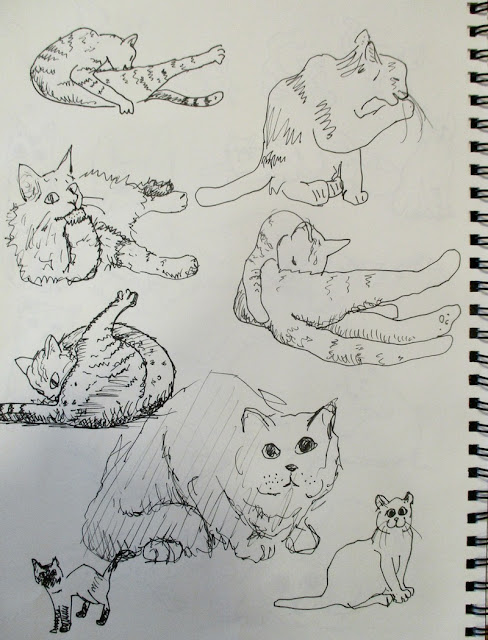 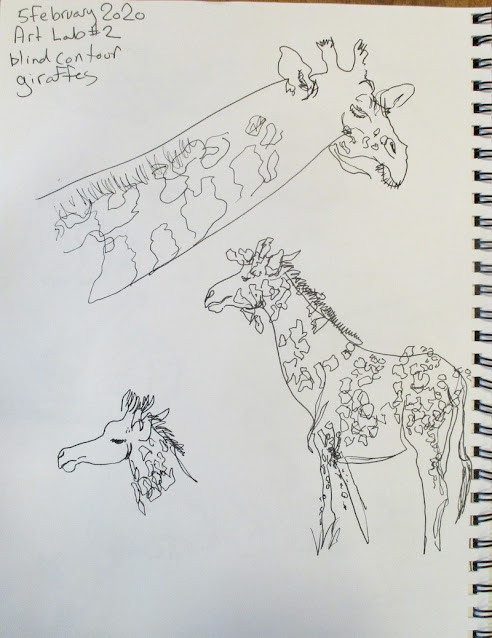 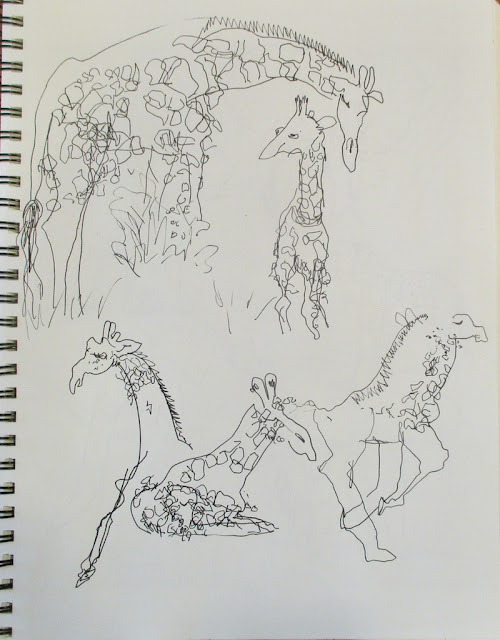 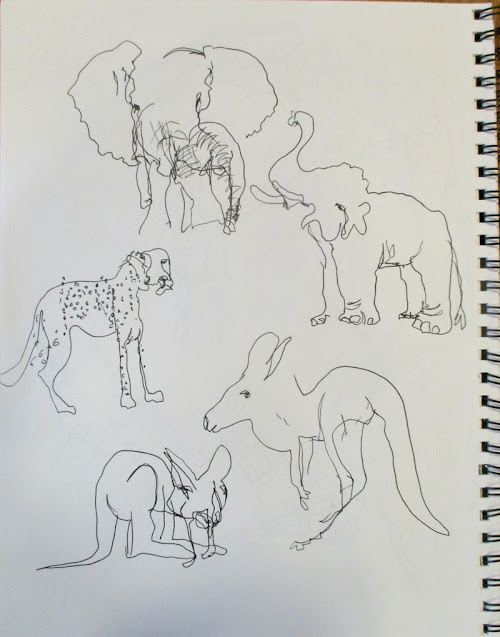 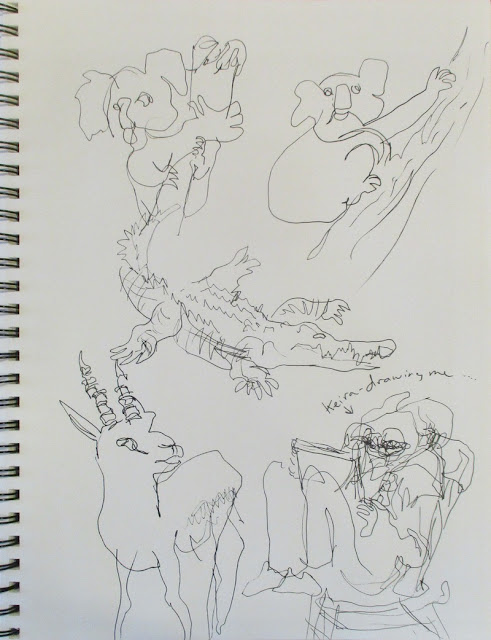 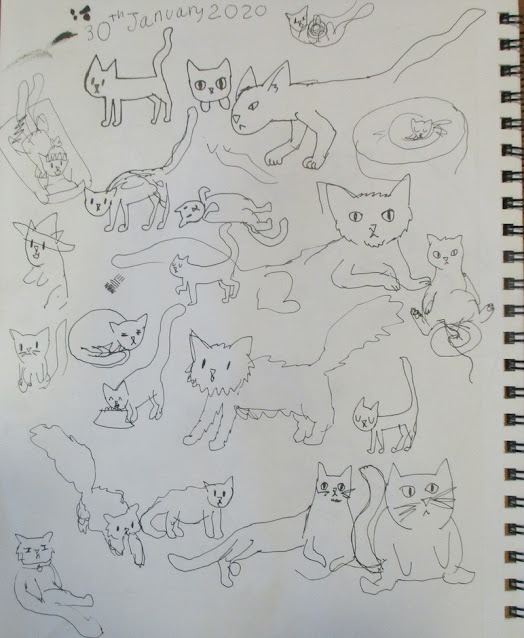 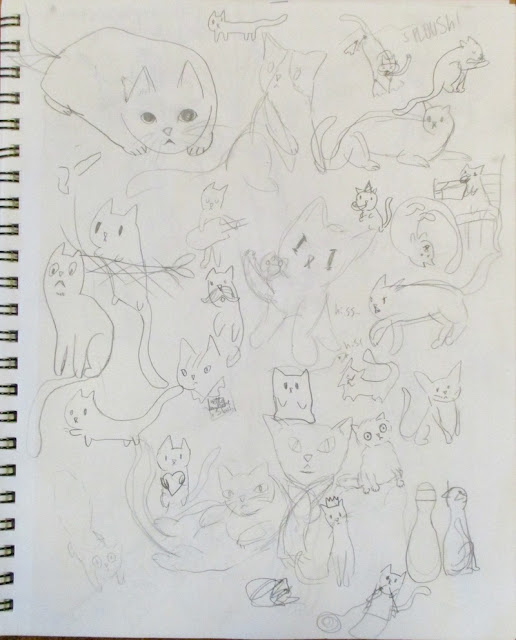 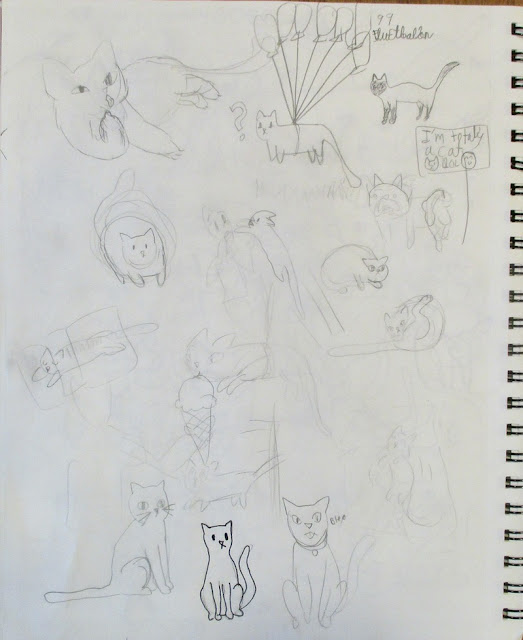 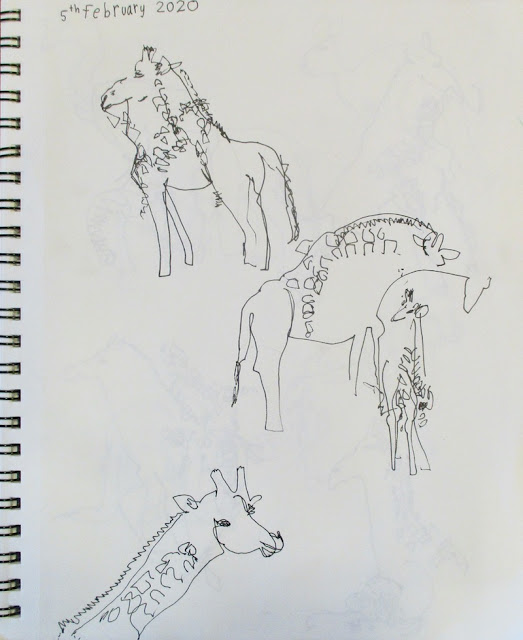 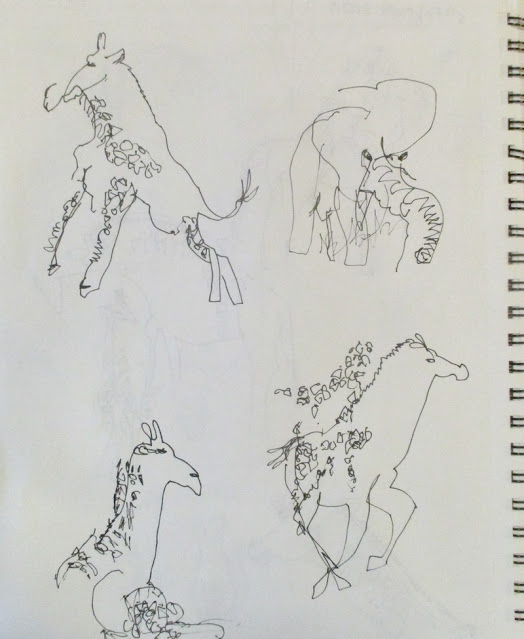 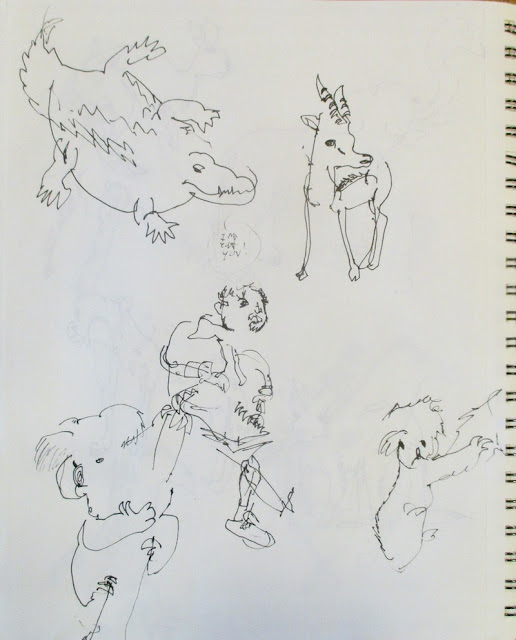 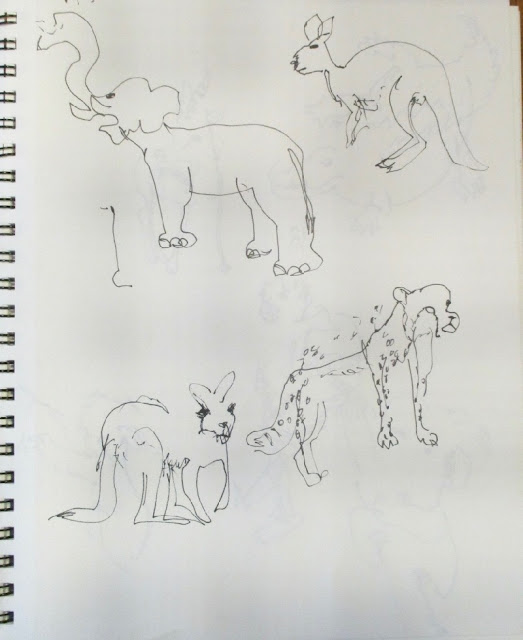