So I had a pretty solid challenge for myself in September. Without a clear plan, I kind of flailed around throughout October. It looked like November might be more of the same, but then on the morning of the first, I happened to be scrolling through Instagram and came across THIS FABULOUS PICTURE by Vancouver artist Rebecca Dart - and I happened to look at the hashtags - #dinovember #drawdinovember -  and thought; "'Dinovember'? That's a thing?" and I kind of just decided right then and there I'd have go at it and... see where it goes...

I took Keira to Irish Dance class in the afternoon (I was playing hooky because I have a LCL strain ad my knee was feeling a bit tender) and it was such a beautiful day I decided I had to get out and draw or something while waiting. I ended up going to campus and kind of right there decided I was going to draw dinosaurs in and around Saskatoon. I did a sketch of the Geology and Biology Building on campus and... it was awful... but I drew a second drawing with a dinosaur later after I got home... and... it sucked a little less... 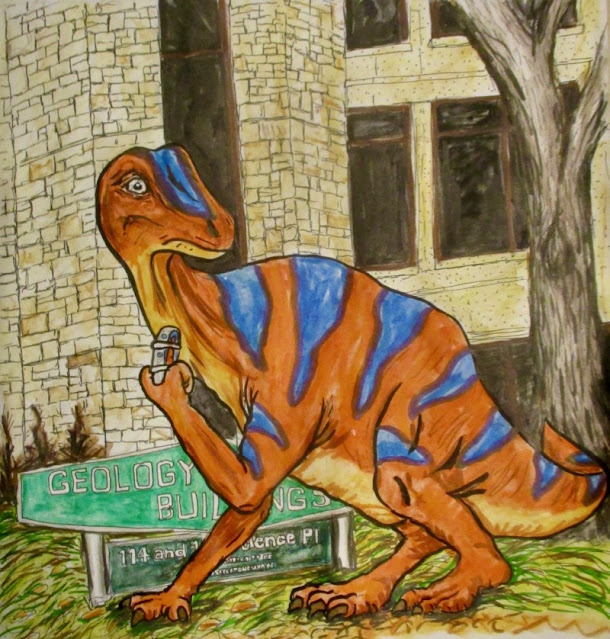 Miasaura spotted on campus near the Geology and Biology building. Poor little guy, he's got a broken finger just like me... or... big guy, really... or... big GIRL, for all I know!? 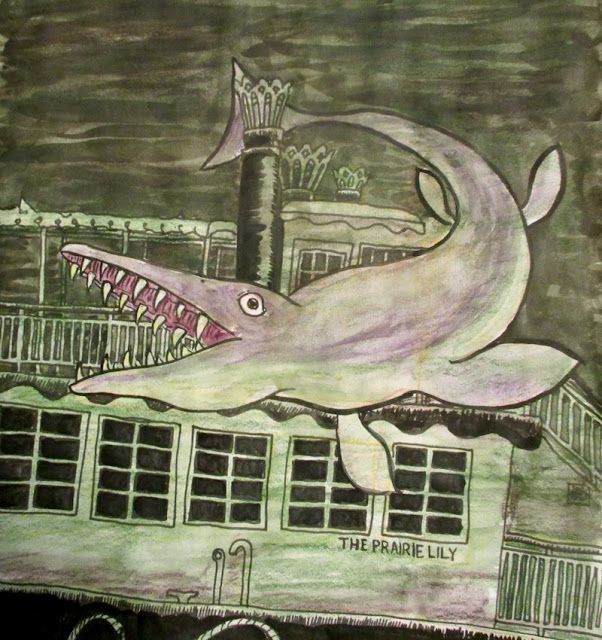 A Tylosaurus Saskatchewansis (a Mosasaur.. not actually a dinosaur... but, y'know, whatevs...) swims past the wreck of The Prairie Lily at the bottom of the South Saskatchewan River.

(No animals were harmed or watercraft sunk in the making of this picture - the Prairie Lily is still afloat on top of the South Saskatchewan River!) 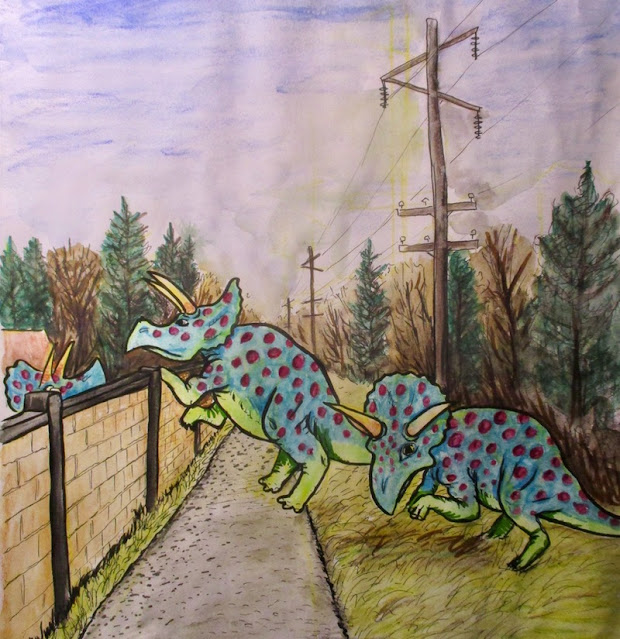 A trio of Triceratops I ran into on the Blairmore Bikeway. Now, not only was I once a five year old, I've had a couple as well, so I know more than your average palaeontologist about dinosaurs... and so I knew they were herbivores and wouldn't EAT me... but when one of them noticed me and kind of gave me the stink-eye, I was suddenly reminded of the fact that hippopotami, also herbivores, just happen to be the deadliest mammals in Africa... knowledge gained also due to having five-year-olds... I just backed the fuck out of there reeeeeeaaaaaal sllllllooooooow like... 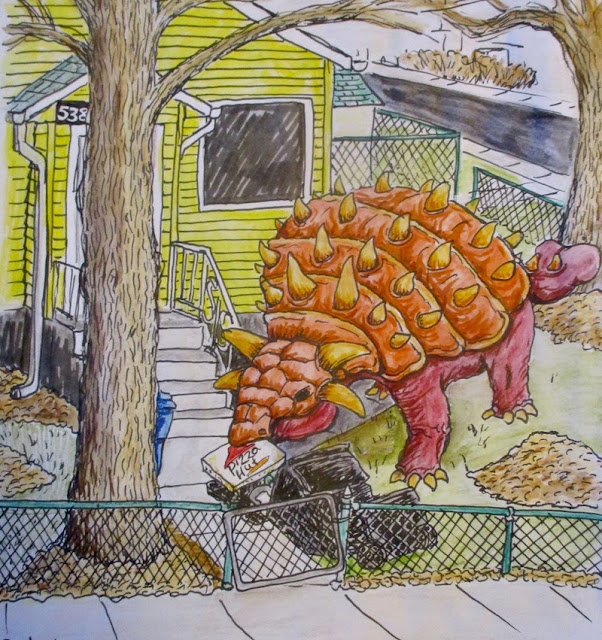 Ugh... More trouble at that house across the street... but... not the USUAL kind!? I mean what do you do? Call Animal Control...?The cops...? A Conservation Officer...? Seriously, even if they DON'T think it's a prank, what are they even going to do!? 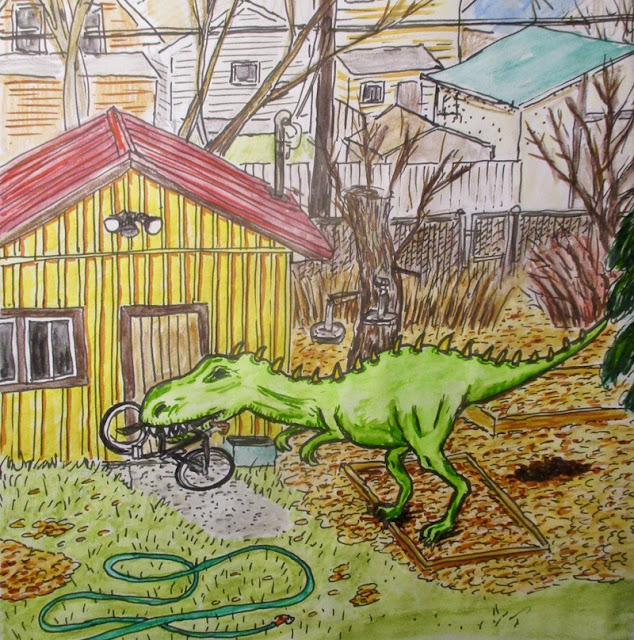 Megalosaurus ("Big Lizard") in My Back Yard

What is this world coming to? I mean, you can't just let your stuff out of your sight for five minutes anymore. I go out for a ride on the Surly Steamroller and get a couple hundred metres down the road and realize I forgot to bring water, so I turn around and zip back to the house. I just leave my bike in the backyard because it's going to be, like two minutes - I just have to run in, find my bottle, get some water and I'm on my way. I get upstairs and grab my bottle and look out the window and there's a fü¢king Megalosaurus back there chewing on the Steamroller and taking a HUGE dump (You should see the way it $h!ts!?) 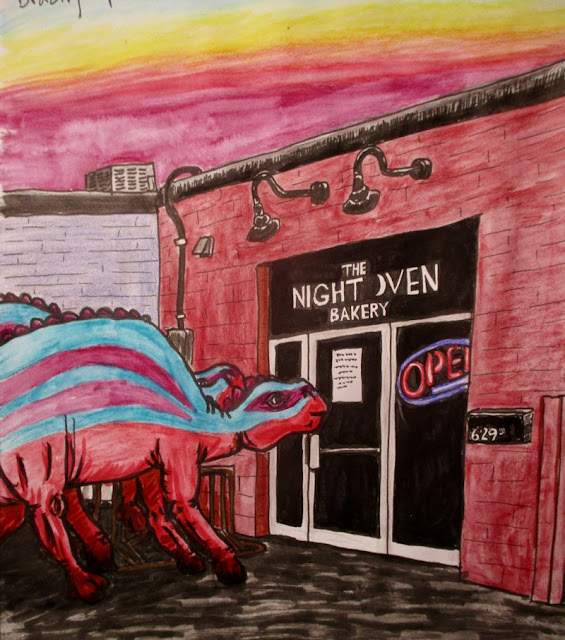 Even the brachylophosaurus know it's Pizza Night at the Night Oven on Fridays... 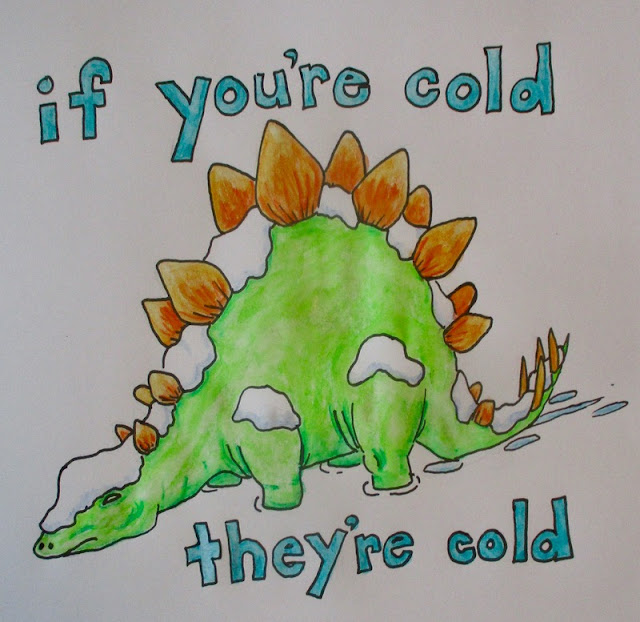 Had our first big snowfall of the year... and WOW!? It was +17°C a week ago... by the end of the weekend there was about 50cm of snow on the ground and the city was pretty much closed down.