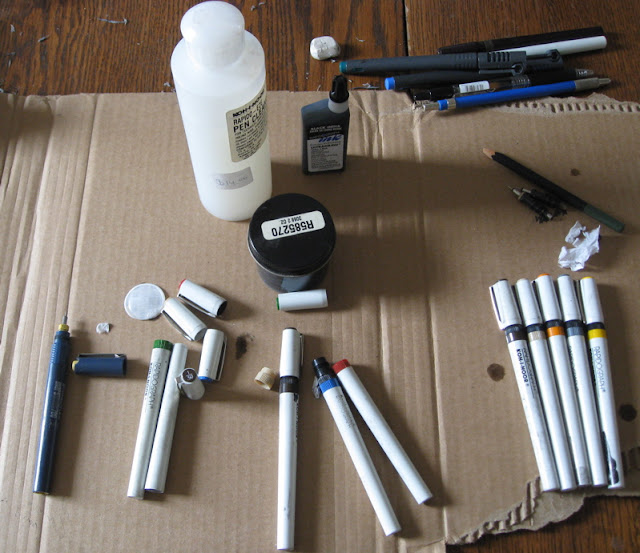 I just spent a good chunk of the afternoon cleaning out some old Rapidograph pens that have been soaking in some cleaning fluid for a couple years. I didn't really mean for them to soak that long...  maybe I should start a little earlier... I didn't mean for them to get that gunked up!?

I really like rapidographs. I've used them since the beginning of my comic drawing days and love using them for comics and drawing in sketchbooks. I just can't get behind these new-fangled "pigment liners"they just run out of juice too damn quick and then you have to pitch them out and buy another one... bah! Humbug!

So I sort of stopped drawing comics... or anything... for about a decade. And it wasn't a "hey I'm not going to draw comics anymore (so I should clean out my pens before this long hiatus so they don't get all gunked up)" sort of decision... I just sort of... didn't draw anything one day... and didn't draw anything the next day... or next week... or next month... you get the picture.

So the pens just got left, full of ink, which really isn't' a good idea for rapidographs. That ink will eventually gum up and seize up the works and render the pens pretty much useless.. But I wasn't really thinking about that at the time.

Now some years back, perhaps one day when I was thinking "hey, I should start drawing again some day..." I checked out the pens and found them to be pretty much wrecked. I did not then throw them out in my despair. Oh no, being the eternal pack rat that I am, I held onto them because I can't throw away something I spent so much money on, no matter how wrecked it may be.

Some months or years later, I happened to wander into an art supply store - because I still did that even when I wasn't painting or drawing for some reason - and happened to spot a jar or Rapid-o-ease - the cleaning fluid for rapidograph pens! So I picked up said jar and thought I'd have a go at cleaning them up. It didn't really seem to work much. My pens were REALLY gummed up. so I left the nibs in the fluid for a day or two and some of the not-so-gummed-up nibs cleaned up okay so I decided to leave a few more of them soaking for... well... a bit longer...

That "bit longer" turned into "several months, maybe a year"... but those thoroughly blocked up pens cleaned up pretty good! Some, maybe, didn't work quite as well as they did when they were brand new, but others were clean flowing and fine. That stuff is MAGICAL. so I dumped the rest of the nibs in - no matter how gunky then seemed.

That was a few years back. Today I cleaned out a bunch of them and salvaged five of them (FIVE!). Two were wrecked beyond repair - the little pin-bit that goes down the tube in the nib had actually broken, so... done.

I have two others soaking in some fresh cleaner now. I think they might have been the original not-so-gummed-up nibs that cleaned up pretty quickly and were refilled with ink and left ready with all sorts of good intentions of drawing... and then got all gummed up again. in the drawer with the jar of stuff being soaked.