To start this look at the sketchbooks I have owned through the ages, here are two of the earliest ones I still have... 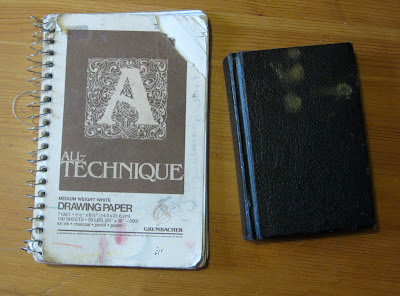 The earliest sketchbooks I have are from high school. One is actually dated 1987 (which, in the fall, when I’m pretty sure I was drawing in it, would have been the beginning of grade 10). The last drawings in the other would have been the summer before grade ten… because there are a number of drawings from a Scout Jamboree I attended that summer. 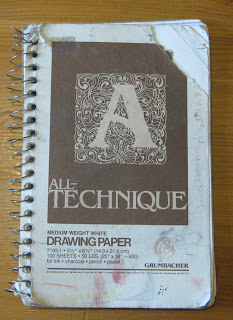 This Earlier of the two is a coil-bound, soft cover, 5.5x8.5” Grumbacher “All-Technique” medium weight white drawing paper sketchbook (“for ink, charcoal, pastel, pencil”). It has a lot of drawings done with charcoal (probably because, at the time, I thought it more “artistic” than pencil…). There are also a few with chalk pastel colour. 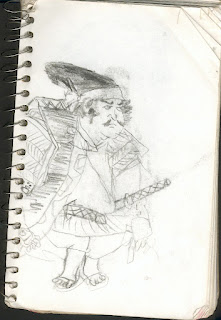 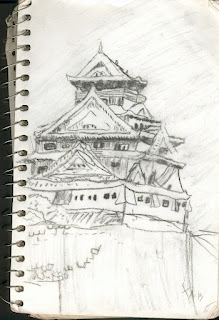 These first couple were pictures likely copied from game books – Dungeons and Dragons Oriental Adventures, perhaps? Ninja I was all about Ninjas and Sanurai in the mid-eighties… 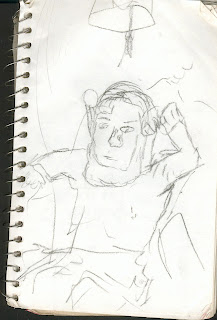 I think this might actually be a drawing of my mom…? 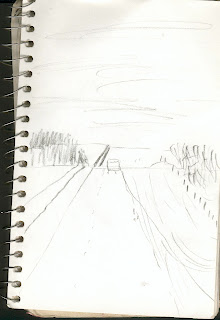 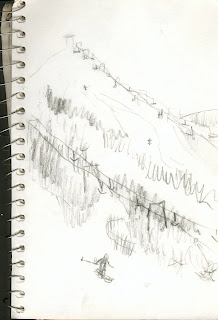 Here’s why I’m thinking this book may have been started in 1986 (or earlier!?) This would have been from a Grade 8 class trip to Blackstrap – a local ski hill. 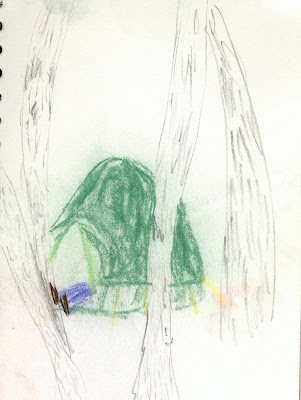 My old green tent… Though I’m not sure whose legs those would be. I’m pretty sure I was tenting alone that year… Maybe they’re my own imagined legs… Or maybe I was sharing a tent with some one and just forgot…

Or maybe that was Schwanke’s tent…? Maybe he had a green one too…? 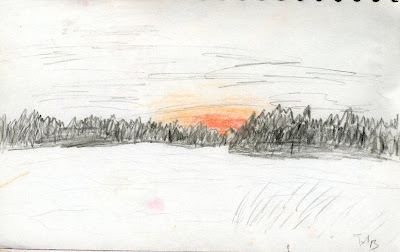 Sunset over Anglin lake. I probably didn’t finish it because I was being eaten alive by mosquitoes… 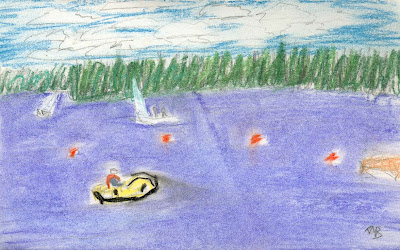 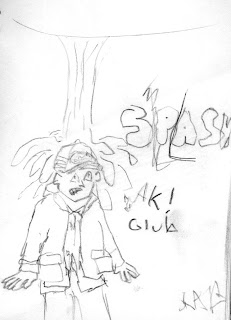 It rained a lot that week at the jamboree. I was standing on a stage (pictured in another drawing below) along with Calvin and Shannon. Water had pooled in the tarp over the stage and Shannon decided to use a stick to push up the tarp and drain the water. Unfortunately, instead of it going over the side closest, where she anticipated it would, it quickly ran down to the side edge and poured all over me… 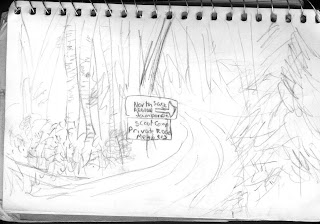 Entrance to the campground 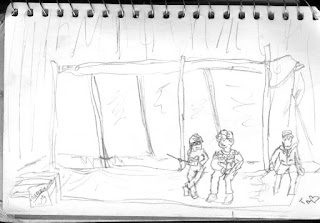 Said stage… I’m pretty sure the figure in the middle wearing a sweater is Shannon. 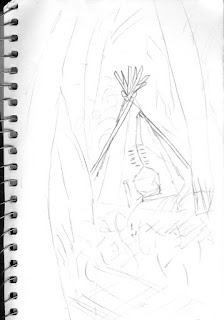 A Tipi – I think Shannon was sleeping in it… 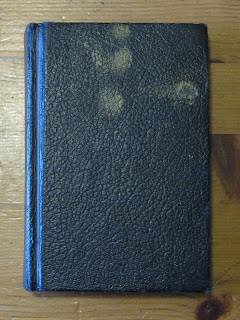 The Smaller one (4”x6” hardcover “Signature Edition Classic Sketch Book”) is filled mostly with sketches of my classmates I did during classes. I tended to sit to the right rear of classrooms – where no one would see me looking at them and drawing pictures of them. Consequently there are a LOT of drawing of the back of peoples heads?! Some of them I’d written down, on the back of the page, who they were – but most I don’t need to look, I actually remember who they were, for some reason (are the drawings that good!?). Others I didn’t write down, mostly because they were so awful I didn’t ever want anyone to discover the book and look at one of the poorly drawn pictures with someone’s name attached to it and think “That’s supposed to be [insert name of victim here]?!” Even now I am feeling reluctant to put names to any of these. What am I worried about, though – like anyone I knew from high school that might know any of these people would ever be looking at this blog!?

They were all drawn very quickly – almost gesture like drawings – probably because I was horrified someone might notice me drawing pictures of them.. or the teacher might notice me drawing pictures of my classmates when I should really have been doing something else… A lot seem to be of people reading . I think these might have been during a reading period at the beginning of some English (or “Language Arts” classes).


While the pages are small, the drawing and tinier still - taking up only a small section in teh center of the page (much like how my own kids draw now... maybe I shouldn't hassle them so much to try and use more of the page... They'll get there...). Unlike the previous book, which was almost all done with charcoal pencil, these were almost all done with lead (well... graphite) pencils... 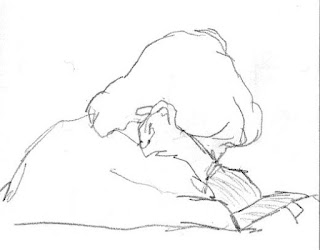 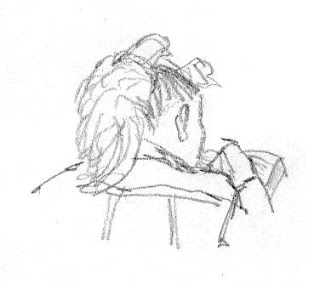 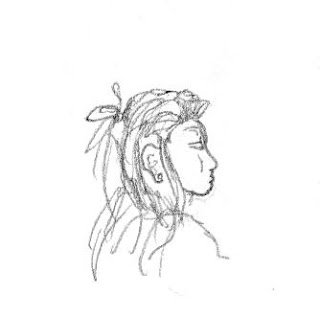 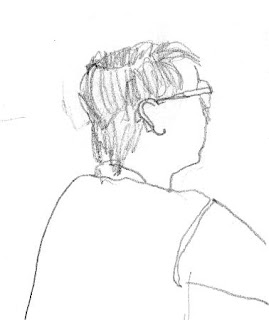 Warren, one of the few that was actually a friend. 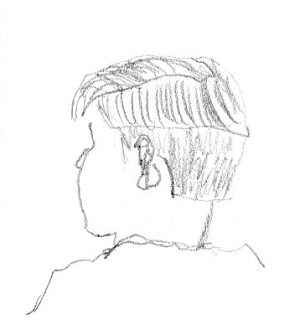 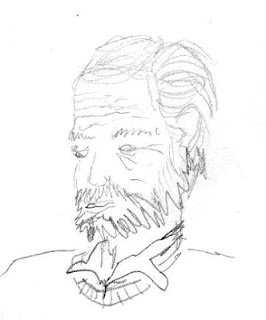 A rare picture of one of my teachers. Of the dozens of drawings in teh little book only two were of teachers. This, I think, was Mr. Parsons, my grade 10 geometry teacher. I actually liked geometry. 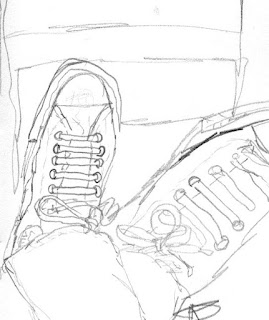 My beloved Converse All-Stars. They were red. 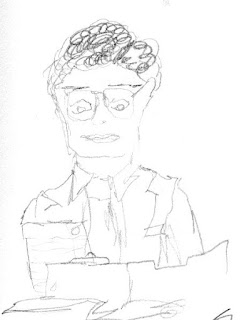 Kieran. Not a classmate – apparently I took this book along to Youth Parliament. 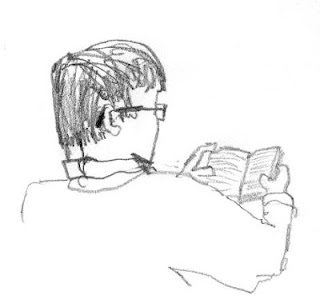 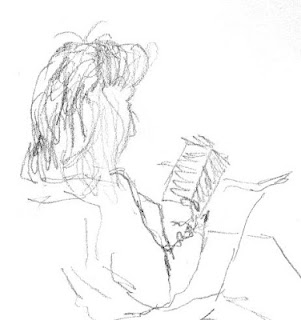 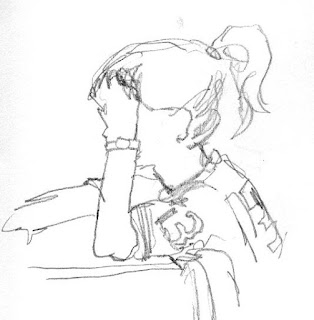 The thing I really like about sketchbooks is they’re a bit easier to hold onto. So much work has gone into them, it’s hard to say “bah, I don’t need to hold on to this picture” and just throw it out – like I’ve done with so, so many individual drawing and paintings. Some of the earliest records of my artistic endeavors are contained within these sketch books - not my earliest drawings - just the earliest that remain.

It’s probably why I encourage my own kids to draw stuff in sketchbooks rather than on loose individual pages.
Posted by tim at 10:09 AM