Painting with the Kids Again

We’ve been doing quite a bit of painting around here over the last couple weeks. At some point the kids asked why they couldn’t paint on the big boards like I do? The immediate response that came to my head was “because you’re too darn fast!?” I tried to explain it a little better than that. Simply preparing one of my artboards is a pretty labourious project that takes up a considerable amount of time, spread out over a number of days… too much time, I thought, to supply kids with when they paint a picture in a matter of minutes…

But then I thought; “Why not indeed!?” But, to give them a sense of the work involved (and hopefully understand why I won’t be providing them with such luxuries EVERY day we paint…) I had them help out with the preparation of the boards. I cut all the pieces on my own (table saws and four-to-six-years-olds just don’t seem like a good combination). But I had them gather round and watch the board and frame being glued up. When that had all dried completely (the following day) we started applying gesso! 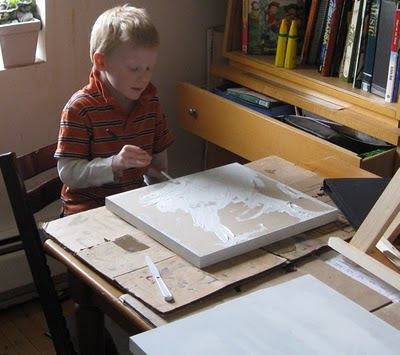 I’ve had then do three coats and even got them to sand after the first coat… hopefully they’ll take their time with the painting (at least five minutes…)!? 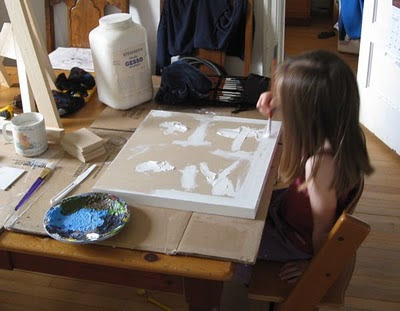 They applied the first two coats on Sunday and the third today. I promised them they could paint on them tomorrow – stay tuned for their immanent masterpieces!
Posted by tim at 12:09 PM