Last of the Critters on Bikes

Well… the small ones…

For those that haven’t been following along, three of four years back, my partner Amanda got a pile of picture frames of Xmas. I think my mom might have gotten them for her. They sat in a box for a year. The following Xmas she put them up on the wall – with the silly “photos” that came in the frames – an annoyingly happy looking family in black and white… She hung them up thinking they would motivate her to fill them with her own watercolour paintings. They hung there for a year. You wouldn’t believe how many people asked if it was Amanda’s sister and her family! Another Xmas rolled around and I decided to take it upon myself to start filling them with my own paintings. Every gift giving event since then I have tried to have one done – birthdays, Xmas, Mother’s Day, Anniversary, etc.

You can see them all by clicking on the Critters on Bikes label. 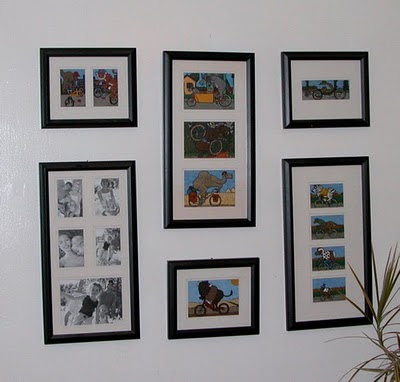 For almost a year I’ve had a very clear idea of what I was going to put in there and I thought It should be for something big (like… say… a 15th anniversary…?). I also knew I’d have to fill all five spots all at once, as they sort of tell a story, so it would take a bit of time (like a week where Amanda’s away in Ontario visiting her folks…). Unfortunately I’ve missed the anniversary by about a week and a half… Ah well, she’ll see them tomorrow when she gets back from visiting her folks in Ontario.

Now the four little ones I wanted to be a continuation of the same picture – to make it work I actually painted it as one long picture and then cut it into the four individual pictures:

Now there’s a bit of longitudinal exaggeration here because once I cut them I wanted at least an 1/8” extra all the way around the picture so it would fit into the frame properly – necessitating a full ¼” of extra space between the “live areas” of the pictures.

This is the only place you’ll ever get to see those all lined up nice and neat like that, because shortly after the picture was taken I cut them into the individual pictures… 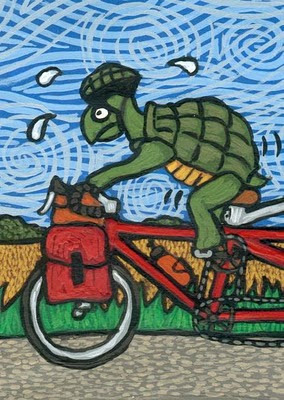 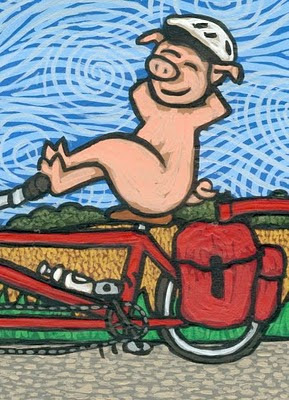 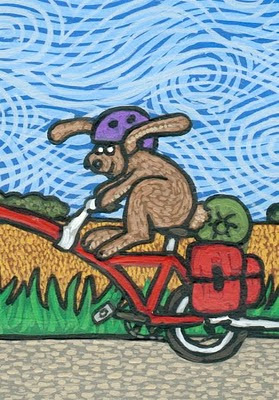 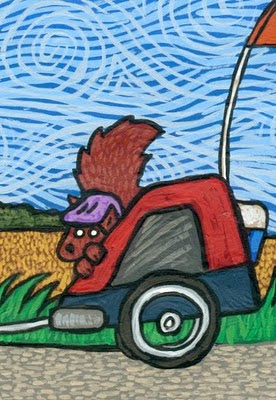 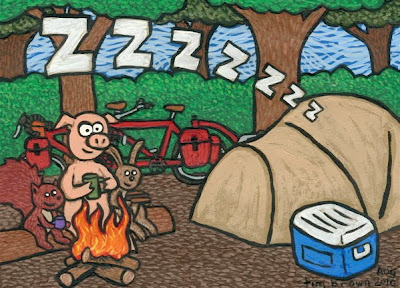 Now when I say “last of…” I mean I’m done with painting these tiny ones on paper. I’ll probably paint more critters on bikes at some point, but they’ll be BIGGER like the Retired Rat. Actually I think I’ld like to get back to painting on surfaces even bigger than that! Maybe not quite as huge as I was painting before (like, a decade and a half ago… when I was painting on 4x4 sheets of plywood…). Something about a metre squared… give or take…