Things slowed up here over the last week or so... I've done a bunch of rough sketches of ideas... but they were kind of all over the place and I couldn't stay focused enough to manage to turn many of those ideas into finished drawings or paintings.

Here are a few things I did get to... 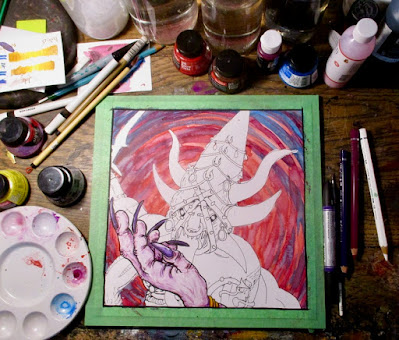 Process picture of work on Daemon Prince Garzongdong - another portrait of a character in a game I play. 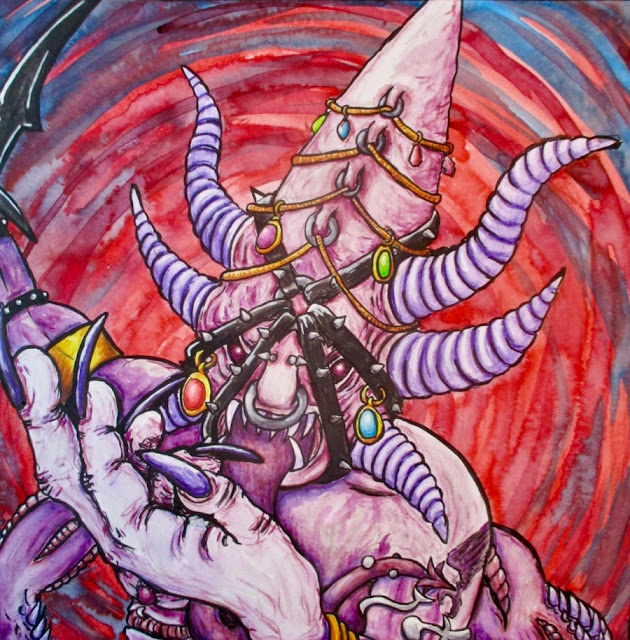 Garzongdong was once a captain in the Emperor's Children Space Marine Legion (32nd company). After the fall of Horus, he led what remained of his company around the galaxy in the relentless pursuit of all manner of excesses. They cared not where the currents of the immaterium took them, on that there were worlds for them to burn and plunder and bathe themselves in all manner of indulgence. After a thousand years of such debaucherous pursuits, the Dark Prince rewarded Garzongdong with Daemonhood. 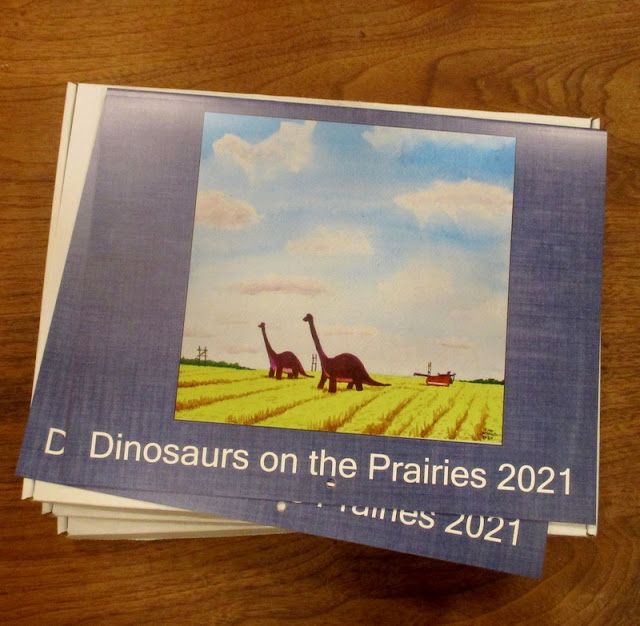 I did a little thing... there was so much enthusiasm amongst my friends on Facebook for the Dinovember 2020 drawings and paintings, that I thought I'd make a few calendars for those that wanted them. Amanda makes photo calendars for our folks and my sister every year, I though possibly I could do the same, but with the pics I took of all the Dinosaurs. So I put a post on Facebook, collected pre-orders until the first and then ordered the 30 I needed (I sold 26, then there was one for me, folks, sister - who are all getting TWO calendars this year - one with dinosaurs, one with pictures of the kids.

I also sold off most of the originals - at least the ones that were on separate sheets of paper - not the ones I did in my sketchbook.

It was a fun little project - but ended up taking up a lot of time - messaging back and forth and keeping track of who ordered how many and laying out the calendar and placing the order - and then a LOT Of anxiety over how it was going to look (it ended up looking pretty good - much, MUCH better than the worst possible fears - which is where my brain always goes!).

Back to prairie landscapes for a day (or maybe two).... 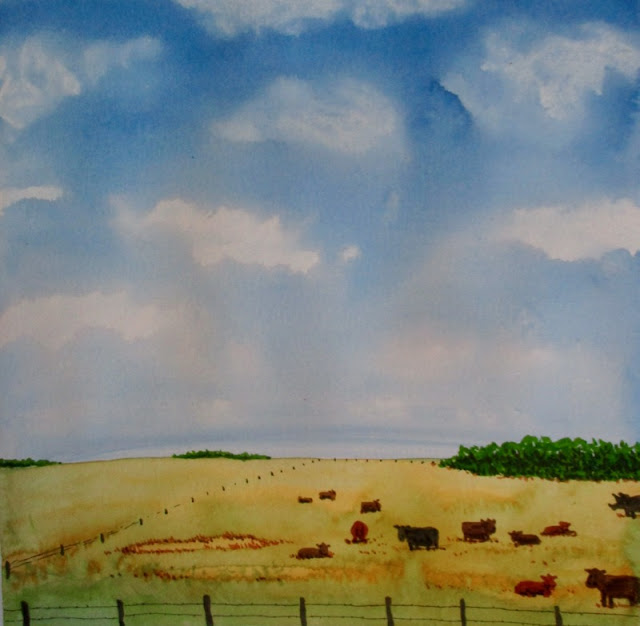 Wasn't happy with this one. 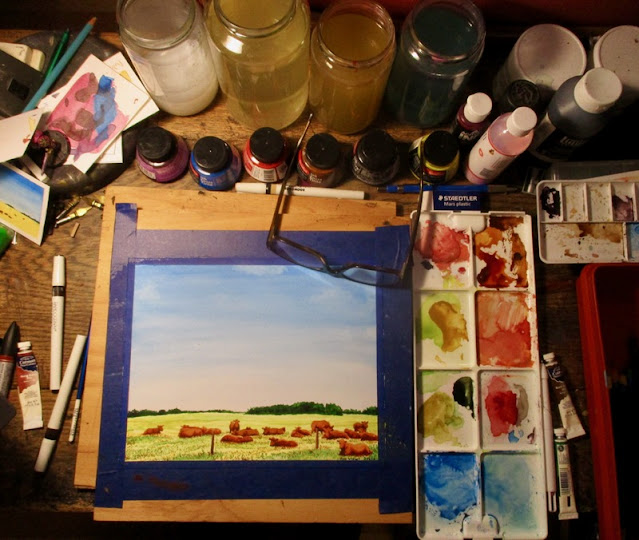 The next one - process. This one I actually used a photo reference (a picture I took myself while out on a bike ride in the country side a few years ago). 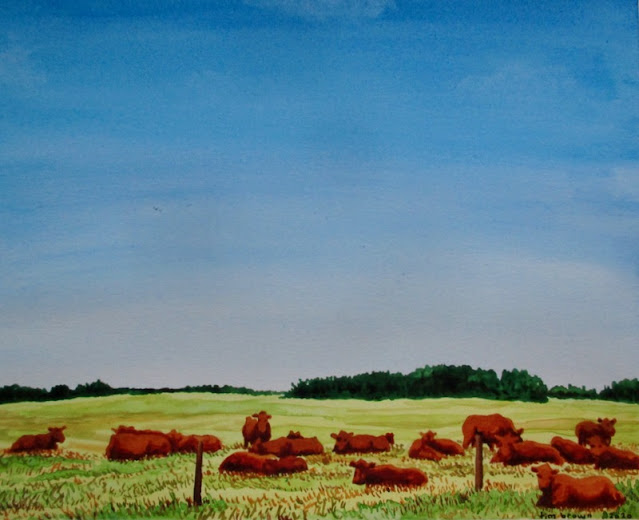 Cows in a Field

I actually painted this for Amanda's mom. I posted it on Facebook and tried changing the permissions so that her mom and sister wouldn't see it.... then I moved it into an album with all my other art. Apparently, when you move pictures to a new album, Facebook changes the permissions for the picture to that of the album... so she saw it - and commented on it. I didn't mention in the post that it was for her, but it's not going to be as big of a surprise. At least she said it was "[her] kind of painting". 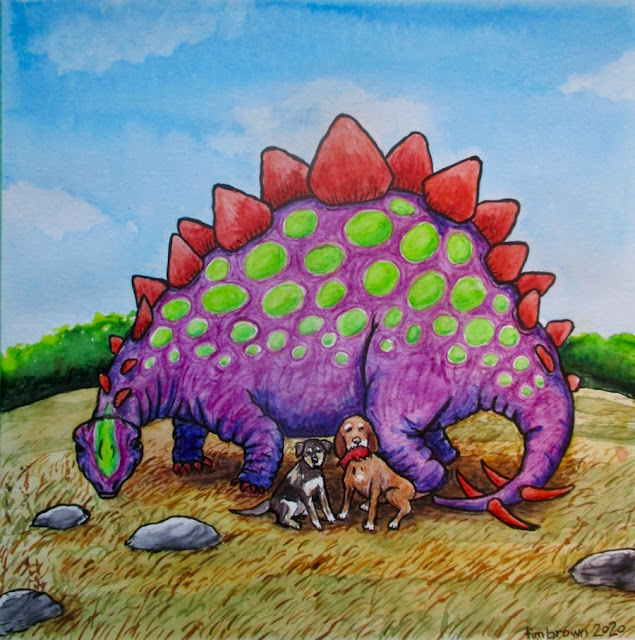 Zilla and Ringo Meet a New Friend at the Park.

Another surprise for some friends. Not going to make the mistake of posting this anywhere - well, anywhere people actually LOOK at things. I ALMOST posted it to Instagram - then realized one of the couple I painted this for is a follower (though I don't think she's ever liked or commented on anything I've posted on Instagram... still... not going to take the chance). I feel pretty safe posting things here as I'm pretty sure NO ONE is even following this blog anymore - the few views this one gets are redirects from my OTHER blog. 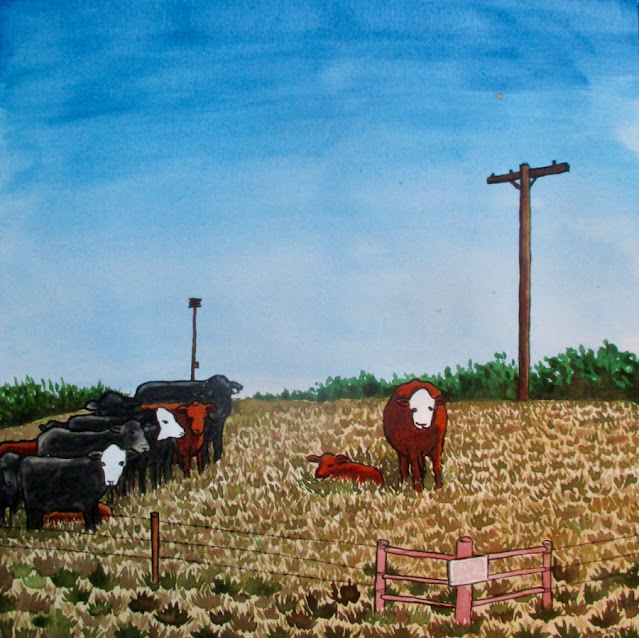 I think I'm done with cows. Not sure what I'm going to do with this one. It was kind of the back-up plan painting if the other one didn't work out (started painting this before finishing the first). The first is okay and was smaller and easier to parcel up - and, in fact, WAS parcelled up before this was even finished - so there was no real options to send it off if it DID turn out "better"...

Back to character portraits?