I’ve owned quite a few sketchbooks. I can’t say I’ve always had sketchbooks or always carried or anything like that. but I have had a few, and still have (almost) all the ones that I have drawn in over the years. The earliest ones are from when I was in High School. Grade ten, I think, circa 1987. 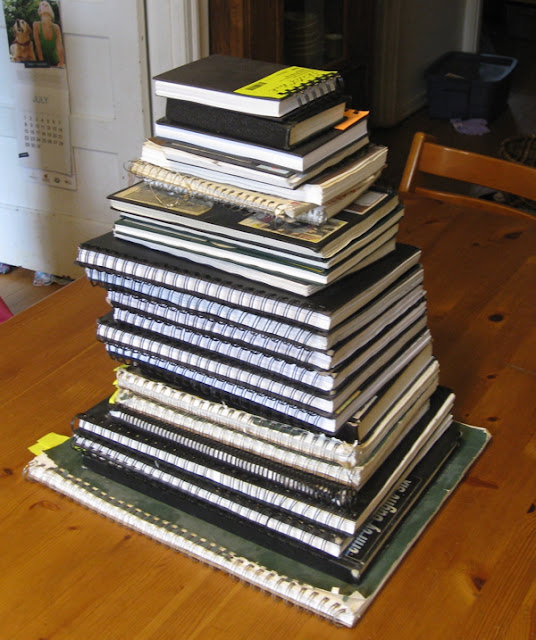 Often I’ve decided “I need to draw more!” or “I haven’t been doing enough drawing!”. I make some promise to myself that I am going to draw more – “I will draw something everyday” I tell myself. To celebrate this new era in my life I would buy a new sketchbook… often it would get only about half-filled before it was abandoned… either I’d given up on the drawing or decided it wasn’t what I needed – too big to carry around, too small to draw the way I really want to, paper that’s too cheap to really draw in, or paper that’s to expensive and precious to be making grocery lists and other rambling notes in (as I often end up doing…).

About a year and a half ago I decided it was high time to start drawing comics again… and to draw comics one must be able to… well… draw… Inspired by the likes of David Collier (who I know always has is sketchbook with him and pulls it out at any idle moment to start sketching whatever’s around him) and Jeffrey Brown (who I was reading a lot of at the time and often draws himself drawing his comics in a sketchbook in a coffee shop) I started carrying a sketchbook with me again.

I also read a couple books by Danny Gregory (Everyday Matters  and The Creative License) and Dan Price (How to Make a Journal of your Life) which further inspired and affirmed my notions. Notions that a) I should draw more and b) that sketchbooks, for me at least, seem like a better record of my life than a regular old journal with endless pages of written rambling about nothing in particular... I can look back at the sketchbooks I have and remember the conditions under which most pictures were drawn; feelings, attitudes, hopes, dreams, fears, etc...

So I dug out all the sketchbooks I owned (that I could find). They were scattered about in boxes, on shelves, under piles, behind other books…  hither and thither throughout the house. There was quite the pile. This was when I noticed, having a good look through all of them. That about half of them were only half full.

So the question arose: Do I start anew (as I always have before) or use up those half-filled sketchbooks? I have to admit I was a little horrified about the idea of all that good(-ish) art paper being unused… But ultimately have left (most of them) be in favour of continuity. Each of those books really represents a period in my life… and to have sketches from 1996 end and abruptly be followed by sketches from well… a completely different time/perios of my life…?! And where to go when I do finish one off? Find a half finished book from 1998? If ever someone was to look thorough and try to follow the mad ramblings and put together some sort of sequence… or… continuity… it would be a nightmare…

What to do with them, though - all those old half-filled sketchbooks…? As I mentioned I am a bit horrified with all that paper sitting there unused. Should I go back and start using them again…? Tear out the pages and use them as note paper? Or leave them as they are as a mark of shame – a testament to my own fickleness (really, who is EVER going to look at them other than me…!?)

Anyway I found one from not TOO long ago and started there… and when I FINISHED that book, I treated myself to a new one! Since then I have been very busy writing and doodling and drawing ans such (mostly doodling and drawing). Nearly a third os the sketchbooks in that pile pictured above have been filled (fully) in the last year and a half...

Originally I thought I’d just post a few highlights from a few of them in this post, but as I was looking through trying to find selections or examples of what I was doing at any period I realized I should probably spread it out over a couple of posts. I’d thought briefly of doing posts for each individual sketchbook, but that might be a bit much. Perhaps a few posts covering the sketchbooks of various periods of artistic endeavor?

Trying to figure out the order in which they were used and the dates has required a bit of detective work, and I’m still not entirely clear exactly when some of them were from…  As for “continuity”…I’ve realized there are a umber that I as working in concurrently and there is much overlap…

I should also mention that I’ve had many, MANY notebooks over the years. Many more than sketchbooks. They are filled with everything form lists of materials required for carpentry projects to grocery lists to wishlists of comics or records to journal-like entries and ramblings about whatever I was thinking about at the time – which might not seem like it has much to do with art, but there was also a lot a doodling and drawing in the notebooks of ideas for projects, comics, paintings, posters, etc…. Perhaps I should try and gather some of those together and do a separate post about them…?

Anyway, over the next few days (weeks…?) I shall endeavor to post some of the drawing from various assorted sketchbooks over the years. Thereafter I plan to update this blog a bit more regularly with whatever I’ve been doodling… stay tuned.
Posted by tim at 9:41 AM