Back to painting… (finally).... (sort of). The kids and I decided to do some new paintings for Amanda’s birthday. We tried to do this on the sneaky-sneaky.

The kids had independently canvassed her a week or so ago to see what she “liked”… They may have asked what ANIMAL she liked...? Regardless, they told me they had not mentioned painting and informed me her answer had been “horses”. As the kids and I have been reading a LOT of Greek Myth lately and they are super stoked about it – I suggested that we all do horse-like-creatures from Greek Mythology.

It took some discussing back and forth – every time Finnegan or I came up with an idea, Keira announced that that was what SHE wanted to do… Ultimately we settled on Keira doing the Hippocampus (pulling Poseidon’s chariot), Finnegan would paint Pegasus (ridden by Bellerophon on his way to slay the Chimera), and I decided to do the Mares of Diomedes.

I should have done some more reading of reference material. Having done these from memory, it was only after I finished I realized that there were four mares and Diomedes was a giant (not a king…). Ah well. Keira was also certain that the Hippocampus did not have any hooves or legs… Most pictures I've seen they have hooves, but she recalled a book (Greece! Rome! Monsters!) that illustrated them (as she has) without legs...

We had a LOT of fun painting these... I briefly thought of painting an entire series of painting based on Greek Myth. 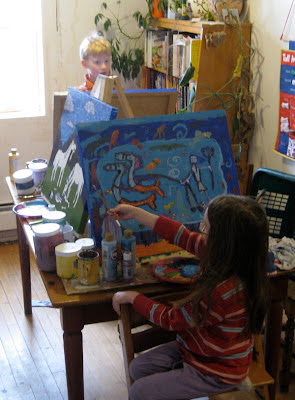 My Artistic Minions hard at work… 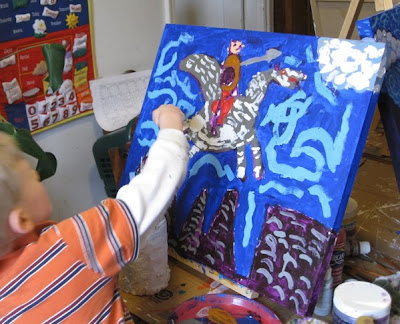 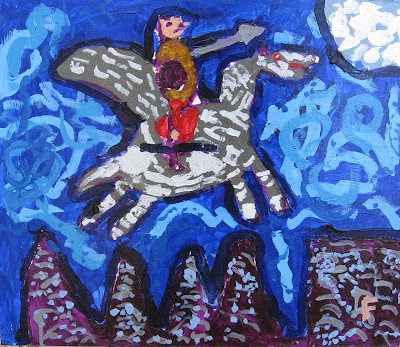 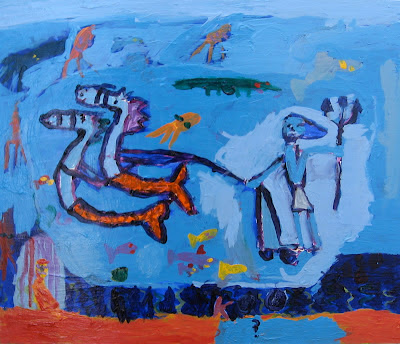 There's a bit of glare on the paintings. I was trying out a new "matte" varnish, which turned out to be "not-so-matte".... so annoying...

Here was my contribution... 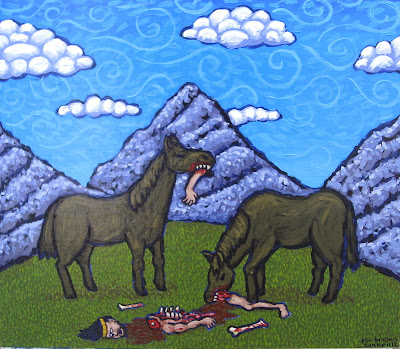 Diomedes is eaten by his Mares

Anyway, we'd let Amanda think we hadn't done ANYTHING for her. I was extra careful with clean up and hiding things away over the days we worked on these. Usually we'd have stuff set out for her in the morning - but we'd waited until she went off to yoga and then hung these in the living room, and weren't going to mention it when she got back just to see how long it took her to notice them. Of course when she got back the kids couldn't start giggling. So she figured it out pretty quick...

I kind of knew that she wouldn't LOVE the painting of Diomedes Mares... Might even be a bit dissapointed that it wasn't another Critter on a bike... but I was completely unprepared for how... um... offended... she was that I would paint such a picture for her.... Seriously, I think it ruined her birthday.

Well... it's gone now - quickly removed from the living room, sanded and gessoed over while she was out with the girl in the afternoon. Probably wasn't the smartest thing to do - either of the kids probably would have loved it in their room... but no one ever accused be of being the brightest spark in the fire and what's done is done and, it's gone now... I'll let the kids paint something over it. They loved painting on great big board like this.

I, on the other hand, kind of feel like never painting again.
Posted by tim at 10:18 AM